“You didn’t see that coming?”

At the end of 2017, we got ourselves a new camera. Not just any camera, but a Phantom VEO 640S High Speed camera. Capable of filming more than 1600 frames per second in 2.5K video resolution. We’ve written about this amazing beast in an earlier blog and on our dedicated Slow Motion page, but this blog is different. This is a High Speed Video Marketing case-study. To be honest, we’re still working on this project, but we’ll use our blog to keep you up to date on all developments.

Our client for this High Speed Video Marketing case-study are Mutt Motorcycles. As the name suggests, Mutt is a Birmingham based manufacturer of motorcycles with a vintage look. If you like vintage motorcycles, it’s worth checking them out. 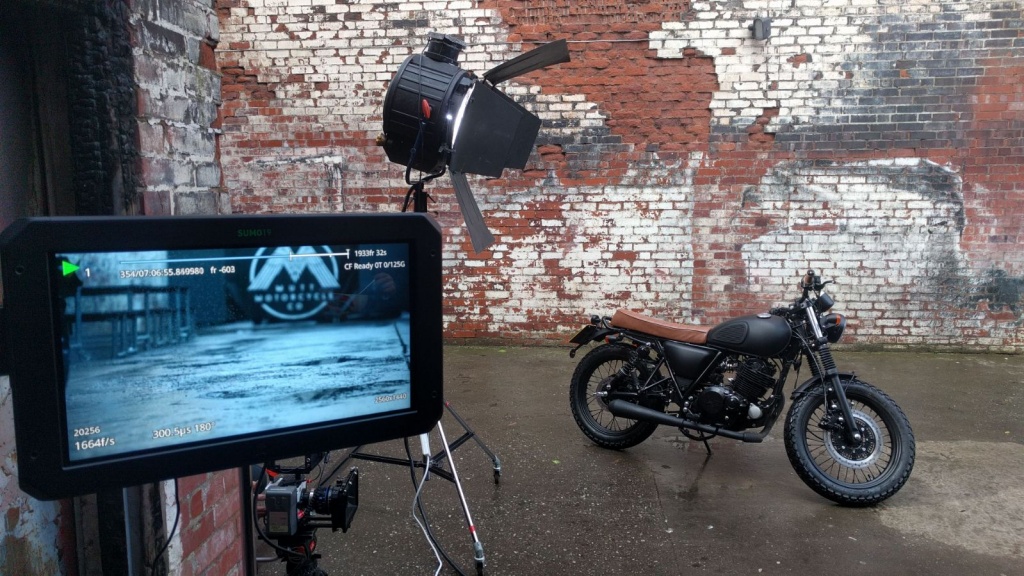 In one of the scenes, our driver of the day had to ride a motorcycle through a puddle of water. This caused the water to fly through the air in millions of little droplets. Our Phantom captured all of this in super high speed.

The first thing that we noticed was the absolute magnitude of light that this camera needs to fully allow us to capture the action. This scene was filmed outside in daylight, but we still required a 2500 kWh cinema light to create the perfect shot. We knew that lighting was an issue, but it really makes all the difference.

The second main point of interest was the lens. In this case we used an 85mm Zeiss CP.3 prime lens. In order to see the mist of water droplets, we need a lens that is able to provide a sharp and stable image. This CP.3 really performed as well as we wanted. When it comes to image quality, all these aspects like camera, lenses and lighting matter. All resulting in this shot:

As you can see in the video, this scene was shot in 1600 frames per second. Normal video is exported in 24 or 25 frames per second. That means that 1 second of real time movement takes 67 seconds to play back. As a result, the event that played out in this 20 second clip took place in less than a third of a second. This means that we’re talking about events that happen in milli- or even nanoseconds.

This amazing effect is even more clear in this next example of High Speed Video Marketing. I don’t know if this is actually a marketing example, but it was fun to do! In this clip, our motion graphic designer and camera operator Lou literally took one for the team. His brother slapped him in the face and we filmed it with the Phantom.

Now the interesting bit here is that we filmed this at 10.000 frames per second in 480p. The part where he gets slapped in the face lasts for about 40 seconds in screen time. This means that the event itself took place in one-tenth of a second. Now that’s what I call High Speed!

These are just two clips that are available to us at the moment. And for us, these snippets are amazingly valuable social media content. There are more clips in the bank, allowing us to share something new with you every day for the next few weeks. And sharing regular content is key to grow and build your audience. If you are looking to social media video content that engages and captivates your audience, High Speed Video Marketing might just be the right solution for you.

But there is more, we are going to use clips like these in a cinematic trailer for Mutt as well. Slow Motion imagery creates emotional content. And if we combine high speed footage with a cinematic narrative, we’ll create something truly amazing. We’ll write blogs about that process in due course.

But for now, start to think about how you can use High Speed Video Marketing in your content strategy. We’re here to help you produce it!