One of the most exciting parts of working here at FDHQ is the amazing kit we’ve obtained throughout the years. What once started with a simple Panasonic camera has now evolved to something truly amazing. We often passionately talk about our cameras; from the RED Digital Cinema cameras to the Sony documentary ENG style cameras and the Phantom super slow motion beast. But something that is often forgotten, is the importance of the actual camera lens. So let’s talk about video production lenses.

When it comes to video production lenses, our biggest source of information is the film-making industry. In fact, the word ‘film’ in film-making relates to the long strip of photographic material used to capture images. When shooting, a camera simply captures multiple images per second. Now almost all cameras record digitally without the use of actual film, but the name sticks. It is, however, the lens that, for a large part, determines how the image will look once captured. It is in fact similar to the way your eye works. You’ve got receptors at the back of your eye, but the lens brings focus and clarity. Let’s dive into the wonderful world of video production lenses.

The Main Trinity of Lenses

In video production lenses, as well as film-making and photography, you could roughly distinguish between three types of lenses. Below, we’ll briefly introduce those three main lens types. The first category are the normal lenses.

Basically, a normal lens helps to shape an image that resembles the way your own eye would perceive it. A big difference between a normal lens and your eye is the peripheral vision. Our own eyes do have a wider view. It sounds a bit weird, but it is better explained when compared with the other two categories. In essence, normal lenses are normal lenses because they create a normal perception to the image. Makes sense, right?

The second category of lenses are called telephoto lenses. Photographers often use telephoto lenses to get closer to a subject without them getting physically close to it. In fact, they create a narrow field of view compared to normal lenses. In film and video marketing, telephoto lenses serve a second purpose. These lenses appear to bring the background closer to the foreground, making objects moving towards the camera appear like they are hardly moving at all. There is a lot of maths and physics that go into why objects appear closer together, but for now, it’s best to leave it here. This effect can be used to show unity.

Another big distinguishing feature between lenses is whether they’re zoom or prime lenses. For example, most photography lenses have a variable focal length. For instance, one of the more popular Canon lenses, the 24-70mm f2.8L EF, has a focal length ranging from 24mm to 70mm. Here, this distance in millimeters is measured from the surface where the image is captured to the ‘optical center’. The optical center is the point in the lens system where the image is flipped.

But what do these numbers mean? Basically, a lower number can be considered as a wide angle lens while a large number makes it a telephoto lens. As a rule of thumb, with a focal length between 40mm and 70mm you would have a ‘normal’ lens in most circumstances. However, this does depend on your camera, your lens and if you’re using a lens adapter. So below 40mm is a wide angle and over 70mm telephoto. Please do realise that for the video production lenses we’re discussing here, this rule of thumb is for the ease of understanding. The real science and maths go way deeper.

As in the example above, the Canon 24-70mm f2.8L EF has a variable focal length. That basically means that by turning the gears on the lens, you change the focal length of the lens itself. So in this example, you could use the lens at 24mm for a wide angle effect, at around 40-50mm as normal and finally at 70mm it would create a bit of a telephoto effect.

These lenses are extremely versatile. No need for lens changes and therefore delays when shooting. However, you could imagine that with all those gears within the lens housing there are a lot of variables to get right. And we haven’t even discussed the aperture and focus gears! All those gears also means that these lenses are less precise when it comes to focus as its Prime counterpart.

Prime lenses all have a single focal length. Where the Canon 24-70mm f2.8L EF has a focal length ranging from 24mm to 70mm, a Zeiss 50mm CP.3 Compact Prime has a single focal length of 50mm. There is no option to change the focal length, the only variables you are basically working with is the aperture and the focus. The only way to get close or further away is to physically move the camera itself.

So when it comes to video production lenses, prime lenses are less flexible than zoom lenses but will generally give a much clearer and sharper image as the light is having to pass through less glass. Basically, what you lose in flexibility, you gain in image quality. However, if you’re looking to change the image from a wide angle to telephoto, instead turning the gears, you need to physically change lenses.

When to use what?

Above, we covered some basic terminology on video production lenses. But why would you choose one over the other? This decision is based on what the camera operator, director and/or director of photography want in the image and the restrictions of the project. Let’s say you’re shooting a documentary style video with a few talking heads. In that scenario, you’ll be running around filming here and there and spotting opportunities to capture interesting imagery. That leaves little time for lens changes. A zoom lens might work best here. It gives you the flexibility to change from wide angle to telephoto with ease. However, in more scripted video marketing such as an advert, you’ll often have an opportunity to do multiple takes to get it right. Allowing time to change lens to get the best possible shot for the final edit.In this sort of scenario, a prime lens would be the ideal choice. 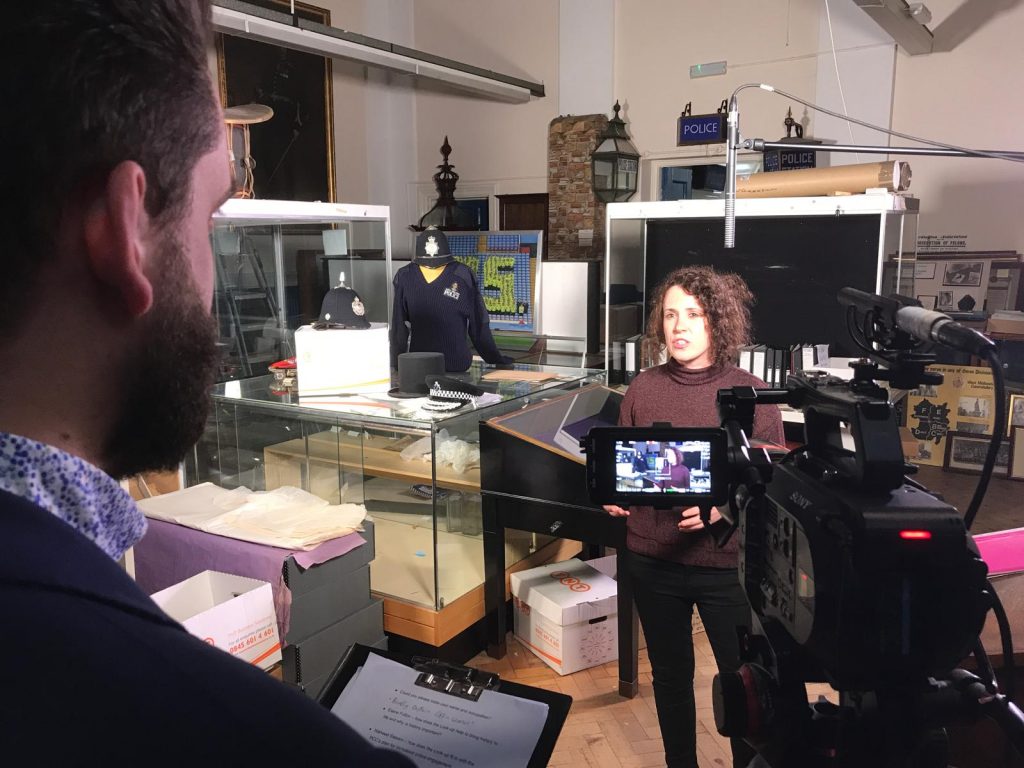 As you can see, the theory and practise of video production lenses is not as easy as it seems. Of course, you could film certain clips on a mobile phone, but those cameras and lenses don’t give you the image quality a professional camera and lens would do. If you know what you’re doing, you can use the lens as a tool to guide your audience through the image. Using a wide angle, normal or telephoto effect when needed to visually guide the eyes of your prospective customers and clients.