At FDHQ, we work with a wide range of clients. One of our earliest partners is VINCI Facilities. Last year, we approached Andrew Brown, a brilliant PR and marketing specialist who often works with VINCI Facilities, and asked him to reflect on the projects we ran together. His words made us blush, especially when he discusses his view on exceptional storytelling.

The magic of film and video

There’s a magic about film and video. Everyone gets excited about the latest new film. We all have an opinion about advertisements and as employees and stakeholders in organisations and brands we often have a personal attachment to how they’re portrayed on TV or online, whether it’s for public viewing or internal communications.

But even with the latest technology and watching countless You Tube tutorials you can’t beat the experts at their own game. I’ve learned that over 25-years or so in PR and marketing. I might have an idea, a basic concept and I know the brand of my client. But taking that initial thought and transferring it from my head, via a brief and seeing it come to life on video is not something to underestimate.

I’ve worked with a number of professional film and video teams and one of the best is Film Division. For me, one of their best traits is the ability to translate an idea from someone’s head to the screen.

We first met when I was compering and facilitating an event for VINCI SA in London. I didn’t have direct input into the items shown that day or the filming of the event. Yet, you could see that they knew how to tell a story succinctly, but still entertain. I always stress the old BBC Reithian adage – educate, inform and entertain. For me that’s the secret of exceptional storytelling and it is exactly what the Film Division team does.

From idea to concept

I saw it at first hand when we worked closely preparing for another VINCI project. This time the VINCI Construction senior management event in the spring of 2019. I was their point man – liaising with the teams within VINCI Construction to help them tell their story and encourage them to be as open as possible and showcase their work. However, what struck me in our first planning meetings was the vision of Kevin Pfeil, the producer at Film Division. Even without knowing the specifics of the projects that VINCI had in mind he knew what would work and what wouldn’t.

His skill was taking the client’s idea and then shaping it there and then in a meeting room with sketches, challenging questions and clear guidance on what might or might not look good on screen. It was clear to me then that Film Division were not just a production outfit that filmed and made edits and presented a final cut. They take genuine pride and no little skill in idea generation and concept development skills.

Taking an idea and producing content that is engaging and fits both with the brand as well as the audience experience is what drives their team. Together, we shaped a brief and then played it back to the VINCI team. Once they understood it, we began the process of identifying the sites, locations and spokespeople to be featured. 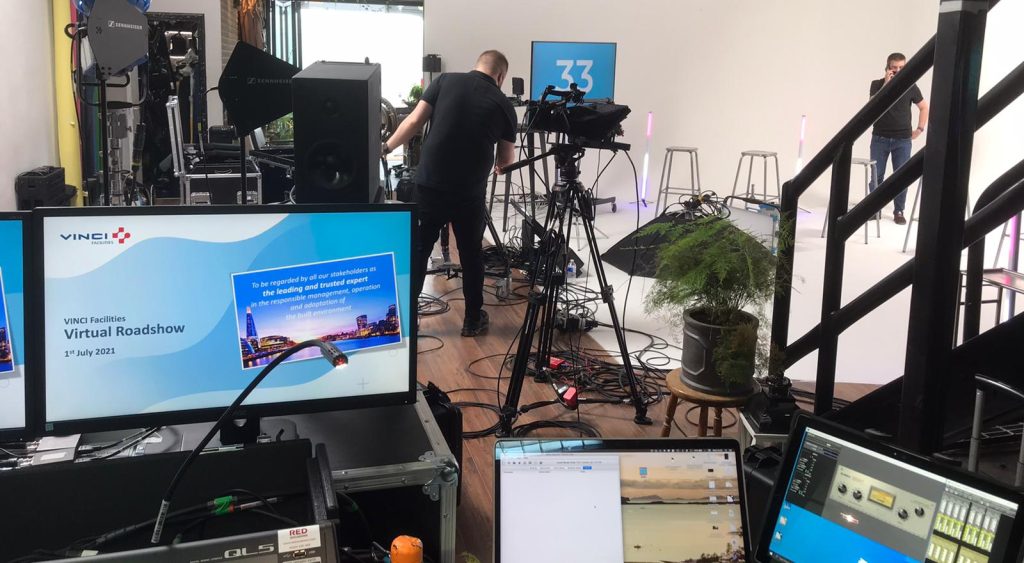 Combine your message with expert cinematography

It’s a much harder graft than people realise. Filmmaking is not just point and shoot based on a story board drafted in a meeting and sheets of A2 paper. You need to have a sense of what it will look like – how the framing will work, along with the light, the angle and how an individual or setting will come across best. That’s the skill of the camera operator, or cinemaphotographer.

I’m a fan of film making and cinema, particularly westerns that lend themselves to great shots of landscapes and sunsets that evoke a sense of wonder. That’s a bit romantic for most corporate videos – but the same basic skill is needed. You need to visualise the message and take time to get it right. You take the idea, the message and the cinematography nail it. It is a combination of what the producer/director does in the shape of Kevin and his cinemaphotographer Alex Dewhirst delivers behind the camera.

For me, working with Film Division emphasised something that clients need reminding repeatedly. Exceptional storytelling with words, pictures and moving images can only be achieved with a proper understanding of the message backed by professional experience and skill. That is the same with graphic design, editing, photography and film and video production.

Each time I’ve worked with Film Division that dedication and professionalism shines through. It might be a corporate management conference composed of short films and links, a bespoke video message from a CEO to his/her team or a live production of an employee engagement event to a slick, promotional video that would work as well on a live conference stage as on TV. They can do all of it and no matter who you are, or what the budget you get the same commitment and skill.