Learning on the Job

It’s rare a project comes your way that you really have a passion about, I was fortunate enough for that to happen to me when we were commissioned to create a cinematic video for a boxing promoter. Boxing is my sport, I’ve always admired the art of pugilism, everything from the modern day all the way back 1805 when the first World Champion Tom Cribb burst onto the scene.

As the director and producer for this cinematic video, It was important for me to get this right, I wanted to do a mixture of footage, one shoot consisting of staged shooting where I used staged lighting to capture the atmosphere of the location. The second was the ‘documentary’ feel….after all I couldn’t fake a real fight. First of all I had to select my boxer. Karl Wiggins is an influential athlete based in my home town of Birmingham. We both train in the same gym and we’d talk about the vision while walking on the treadmills. Karl had his ups and downs in the boxing world, he’d lost and won on various levels, having someone as humble as Karl who’d follow the film through to completion, win, lose or draw was imperative to the production. Lucky enough, he won on the night we shot the fight.

Preparing for the shoot was as important to me as actually shooting it. I knew exactly what I wanted. I mentally set the shots by storyboarding all the set ups I wanted. I used the storyboards to plan every shot as well as give my crew an indication of what I was trying to achieve. This is always important for any crew, everyone needs to be on exactly the same page before the camera rolls, turning up to any shoot without a solid plan can very quickly descend into chaos. Everyone needs to know exactly what is going on. 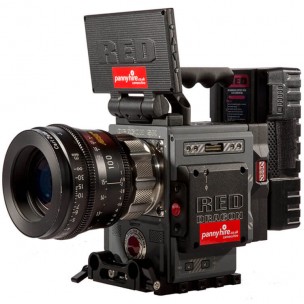 Camera selection for this job was also key to achieving the look I wanted. I wanted a very cinematic approach to it, I wanted it to feel like the footage could be seen equally on a small screen all the way to a cinema. Along with the camera choice (which was a 5K camera) I knew I needed slow motion, our sister company Panny Hire was happy to accommodate the shoot with the latest Red Digital Cinema Camera, the Scarlet Weapon.

The shots we’re fairly simple to achieve. As a crew, we needed to be able to work fast and efficiently. I chose a one light approach for the gym location, the gym itself is very dimly lit and without any way of covering all the light I had no choice but to angle everything carefully so I was using a mixture of both natural and artificial light…having the one light made this a lot easier. We were able to quickly knock each shot off with ease and move onto the next setup. I hate too many static shots, I believe we’re a race of movement so keeping the camera moving constantly was important. This was the same for the actual fight footage for which I didn’t have time to setup a dolly and tracks at the side of the ring. So I decided to use a monopod to achieve the handheld documentary look. The fight footage was more tricky to get than the gym footage. I had to be reading the pace of the fight as well as making sure my shot was composed correctly, all at the same time trying to capture that ‘in the moment’ type feel to the live fight.

Upon completion of the shoot, I sent the footage to Andy down in London. I had gotten very attached with this project and I didn’t want to spend months on
the edit getting it how I wanted it. Sometimes as a creative we have to let things go into the control of other people for the good of the client. Andy was a perfect choice, he is a ground up type of editor, he can read the feeling I want to achieve just by looking at the footage. He chose the music which I had previously given a lot of thought to, but as soon as I laid eyes on the initial edit Andy had assembled. I felt the music was perfect to capture the mood. After a few very small changes I received the locked edit for the colour grading process.

Like the camera choice the grade was important to capture the emotion of the footage. I love the faded and washed out cinematic look, it always reminds me of some of the grunge ridden small hall boxing venues I have been to. I wanted to try and replicate this feeling onto the screen. I went for the faded look and I believe it worked. Something I will say here is that there is no right or wrong way to grade footage, there is a difference between colour correction and grade. Colour correction is important to neutralise the footage, on the other hand a grade is 100% subjective. My vision couldn’t be budged, I knew exactly how I
wanted the footage to look.

After some sound design using audio captured on the evening of the fight we we’re ready to go.

In summary, everything we do, goes into what we do. Each cinematic video is just as important as the last. Capturing the story and emotion of the content is what we have to plan for otherwise it’s just another video, here at Film Division we want every project to have the same process, all the way from conception, through to storyboarding, onto filming and finally post production. When we get all this right we end up with high quality content.

Have a look at the final cinematic video below!